What to Know About a Pimple on the Nipple 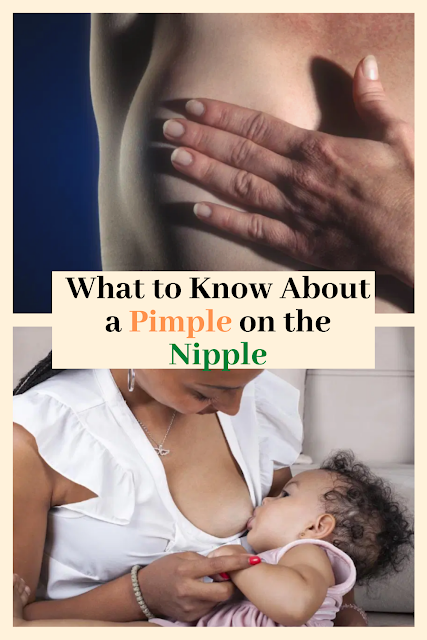 Having a pimple on the nipple is relatively common. Noticing a pimple in this area can be worrying, but it is not usually a cause for concern.

Causes for a pimple to appear on the nipple include:

In this article, we look at different kinds of bumps found on the nipple, and what causes them. We also look at how to treat them, and when to see a doctor.

Pimples on the nipple can appear for the same reasons as pimples elsewhere, though some pimple-like bumps are unique to the nipple area.

1. Acne
Similarly to elsewhere on the body, a blocked pore can cause a pimple on the nipple.

Dead skin cells and sebum, which is the body’s natural oil, can lead to a pimple almost anywhere on the body, and the nipples are no exception.

Hormones are a common cause of pimples that appear anywhere on the body. These hormones and associated pimples are especially common at certain times of the menstrual cycle.

Acne can also be caused by friction from clothing. Wearing a tight T-shirt or sports bra during exercise can cause chafing and pimples to appear.

In rare cases, a condition called acne conglobata can cause pimples on the nipple. These pimples are deep, long-lasting, reddish bumps on the nipple that never come to a head. They should be diagnosed by a doctor or dermatologist.

In cases of persistent acne, doctors may prescribe medication or low dose antibiotics to help with symptoms.

2. Ingrown Hairs
When the hair follicles around the nipple become clogged, the result is often a bump that resembles a pimple.

Sometimes a hair may grow downward. Most of these ingrown hairs will clear up on their own, but people should keep an eye on them to watch for signs of infection.

3. Milk Blisters
Many nursing mothers experience what appear to be pimples on the nipple. However, these may be milk blisters.

Milk blisters, or milk blebs, are fluid-filled bumps that occur when milk gets trapped in the skin ducts.

These can be due to an overproduction of milk, improper latching by the baby, or a thrush infection.

Nursing a child frequently can help clear up milk blisters. Making sure the milk ducts are fully cleared can prevent milk from being trapped under the skin.

Wiping the area after nursing can reduce irritation. Nursing from both breasts and moisturizing the area may also help.

Milk blisters should be treated quickly, as they can become painful and lead to clogged milk ducts.

4. Swollen Montgomery Glands
Montgomery glands are normal skin glands that appear as small, painless bumps on the areola, which is the area of darkened skin around the nipple.

Every person has Montgomery glands, though they are more apparent in some than others.

These glands secrete oil to help keep the skin lubricated. At times, this secretion may resemble the pus that comes from a pimple.

Swollen Montgomery glands are not common and may be related to breastfeeding or pregnancy.

The Montgomery glands should not be pushed or squeezed, as this can lead to irritation or infection.

The nipples are constantly in contact with clothing. Infrequent washing of the body, t-shirts, or bras, can allow dead skin cells, sebum, or sweat to rub into the skin, leading to pimples.

6. Yeast Infections
Pimples that appear alongside a skin rash in the area could be a sign of a yeast infection. The skin may also be red and itchy.

The warm and sometimes sweaty environment under a person’s t-shirt can create good conditions for a fungal infection or yeast overgrowth. Yeast infections can spread rapidly, so quick diagnosis is recommended.

Yeast infections or thrush can be treated with antifungal medications.

7. Subareolar Abscesses
Sometimes, what appears to be a pimple on the nipple may be a sign of a deeper problem, for example, an abscess.

Subareolar abscesses are areas of pus that have built up in the breast tissue. They may be painful, and the skin may be discolored or swollen.

Subareolar abscesses are commonly caused by improperly-treated mastitis. In a person who is not breastfeeding, it may be a sign of a malignant growth in the area.

Abscesses will likely be drained, and the individual will be given antibiotics to avoid reinfection. In some cases, surgery is used to remove the affected gland.

8. Breast Cancer
While it is less common than many other causes, a new bump on the nipple, or a bump that has grown, may be an indication of breast cancer.

A person who is uncertain about the cause of a pimple on the nipple should see a doctor for an accurate diagnosis.

Pimples or bumps on the nipple can appear in both men and women. There are more possible causes for them that affect women, such as breastfeeding or wearing a bra, and hormonal changes.

Nevertheless, men can experience nipple pimples and other complications as well.

Serious conditions, such as breast cancer and abscesses, can develop in men, so it is essential for anyone with an unidentified, painful bump on or near their nipple to see a doctor for a diagnosis.

Pimples on the nipple are often treated the same way as pimples elsewhere, although this may vary based on the cause.

Most pimples on the nipple should be left alone. The body will clear them without outside help, and popping them can make them worse. This is especially true on sensitive skin areas, including the nipple.

Using warm water and a mild soap or cleanser with salicylic acid may help speed up the healing process and prevent infections.

If doctors suspect the lump is malignant, they will run diagnostic tests and begin treatment. Treatments for malignant growths can include chemotherapy, surgery, or mastectomy.

Washing the body regularly, especially after sweating, may also eliminate sebum and sweat from the pores.

When to see a Doctor

In many cases, pimples on the nipple are not a cause for concern. Blocked pores, ingrown hairs, and milk blisters usually resolve without treatment. Other kinds of bumps, such as abscesses or yeast infections, may require treatment.

Anyone with a bump on the nipple that is swollen, red, or painful should see a doctor. This could be a sign of infection or other complication that needs treatment. Swollen lumps deep under the skin could be a sign of an abscess, which should be diagnosed by a doctor.

If the cause of a bump on the nipple is not known, a person should consult a doctor for an accurate diagnosis.

Bumps that change shape, appear alongside other lumps, or if there are other changes in the nipple or breast tissue, this may be a sign of breast cancer. In such cases, a person should consult a doctor as soon as possible.