Home/ Skin Care/Do Ingrown Hair After Waxing Annoy You? Here Are Some Tips & Tricks To Get Rid Of Them

Do Ingrown Hair After Waxing Annoy You? Here Are Some Tips & Tricks To Get Rid Of Them 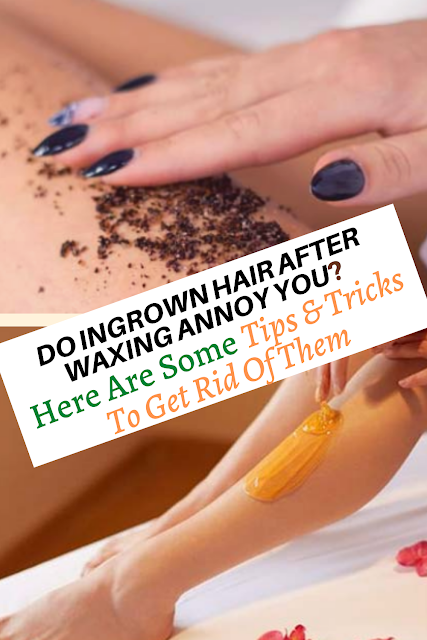 Most of us have suffered this problem of ingrown hair after waxing. These tiny spikey hair protruding from the skin are not just annoying but also painful and unattractive. While waxing helps in keeping the area hair-free for a long time, there are certain downsides of this process too, one of which is ingrown hair. As waxing pulls out hair, sometimes, they don’t come out properly but get stuck on the surface instead. When waxing isn’t done properly, the chances of ingrown hair increase. These generally occur in the areas where hair growth is thick. Many people think of quitting waxing to get a full stop on this problem but is that the right to do? You can cure this issue without pulling out on waxing treatment, know-how in this article.

The science behind ingrown hair

Waxing removes whole hair from its follicle but sometimes the hair break and get stuck in the dermal layer during the process. It is caused as the hair is supposed to be pulled in the opposite direction of its growth which increases strain on the hair. This obstructs its re-growth and instead of new soft hair, you see this sharp and blunt ingrown hair on the waxed skin. Ingrown hair is quite similar to the hair that’s grown after shaving. If you are troubled with ingrown hair and want to get rid of them, below are some effective tips to prevent them from forming.

Exfoliating the skin is an important step that you must do before waxing. It removes the dead skin layer which acts as a barrier for hair extraction. Thus, exfoliation helps the hair to come out easily without breaking or getting stuck in the skin.

Not only exfoliation helps in a smooth waxing experience but it also helps in healthy hair growth that too in the right direction. Buy Khadi Body Scrub to exfoliate the skin with organic ingredients.

Be careful with self waxing

A lot of women in order to save time and money do waxing at home. While this is a convenient practice, it needs to be done properly or else it can irritate the skin and cause skin issues.

You are required to follow all the steps carefully. From prepping the skin to waxing, everything should be done properly to get the hair out without breaking.

After any treatment, the skin becomes sensitive and irritated. You are not supposed to wear tight clothes after waxing as your skin needs air to prevent infections and rashes. Wearing tight clothes would not only agitate your waxed skin but also makes the hair grow back into the skin(ingrown hair) instead of growing upwards.

Sugaring is becoming popular as a waxing alternative. Instead of wax, sugaring paste is applied on the skin, the process is the same. Though unlike waxing, the hair is pulled in the direction of growth which eases the strain on the hair.

Use products that stop ingrown hair

There are some products which are made to prevent ingrown hair. You can easily find them in beauty stores. If you deal with ingrown hair problems very frequently, you may get these products.
Facebook Twitter